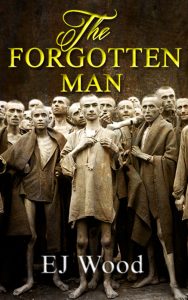 In the late 1960s, just before his retirement, Inspector Timothy Davies interviews Mauthausen survivor Henri Rus from the confines of his cell. He was given the task of taking a firsthand account of Henri’s experience and the atrocities that incurred during World War Two at the slave labour camp.

Little did Inspector Davies know that two months later he would be pulled out retirement to investigate Henri’s death. For Davies, it would send him on an investigation that would teach the world a very important lesson. 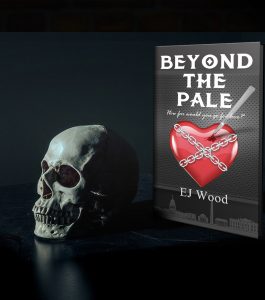 THE THRILLING NEW BOOK FROM EJ WOOD.
Wildly stylish and terrifically entertaining. It ticks all the psychosexual boxes.

Wood’s brilliant debut featuring Forensic pathologist Amelia Sharpe. Doctor Amelia Sharpe moves to Washington, D.C. to further her career with the Smithsonian Institute.  When Amelia meets prominent businessman Guy Davidson, she is drawn into exploring her sexuality. Guy willingly toys with her emotions and pushes the boundaries of pain and pleasure. But, nightmares of her past torment her and she finds herself seeking answers. Her determined probing and obsession has placed her in mortal danger; she realises that to lure the opposition into the open she must use someone as bait. Herself. However, can Amelia make her crucial breakthrough before it’s too late?

THE SEQUEL THRILLER FEATURING DR. AMELIA SHARPE “A SCARRED AND STRAIGHT TALKING HEROINE” FROM THE AUTHOR OF BEYOND THE PALE.

Amelia Sharpe is psychologically scarred from the discovery of her past. She’s spent years avoiding it, burying secrets and building a new life in Washington, D.C. as a forensic pathologist. But, as the job entails, bodies arrive at the morgue. It’s time for Amelia to again face her own demons, because they might just lead her to a serial killer on the loose and the truth about what happened all those years ago. 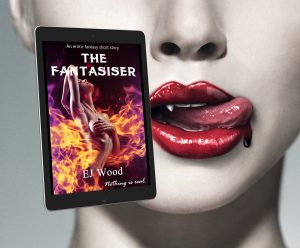 “Most of the guests here are psychotic gang bangers anyway!”
― E.J. Wood, The Fantasiser

When Ileana Wolf agreed to attend an exclusive masquerade party with her friend, she never imagined it would turn into her wildest dreams.

Not all meets the eye when she discovers the truth about the exemplary guests and why she had been invited. Can she keep her provocative imagination to herself or will someone take advantage?

Ileana cannot resist the temptation of the masquerade ball, and when she receives a second invite she is drawn by its mysterious allure. Will her imagination be kept at bay and will the guests be able to cater to her bizarre request; an insatiable appetite for slightly kinky sex? When Caitlin; Ileana’s best friend and house mate joins her at the party, Ileana’s fantasies unveil, but is Caitlin really up to the challenge?

When their perverted landlord starts asking questions, can Ileana keep her imagination in check or does he have to show her a thing or two? Ileana learns that self confidence starts at home.

ONLY 99p or FREE with Kindle Unlimited.
https://www.amazon.co.uk/Fantasiser-EJ-Wood-ebook/dp/B07PTNWYM5/ref=sr_1_fkmrnull_1?keywords=the+fantasiser&qid=1556197468&s=gateway&sr=8-1-fkmrnull