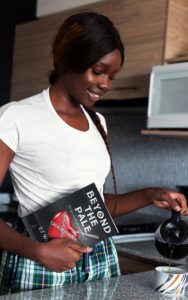 Mr Guy Davidson is an uber rich powerful businessman not unlike Richard Gere in Pretty Woman, who seduces the much younger and naive yet intelligent Amelia Sharpe; a forensic pathologist, seeking to further her career at the Smithsonian Institution.

The flirtatious comments and awkward love scenes are straight out of Bridget Jones that had me laughing out loud. The innocence of our protagonist is hilarious and as the book develops you realise that Guy and Amelia’s relationship is not plain sailing.

Amelia is very quirky, her words are muddled, she’s socially insecure and is a fab contrast to the overly confident Mr Davidson. Amelia’s colleague Thomas Cross is just Mr Titspervert and instantly renders an unlikely character.

The underlying background of Guy’s involvement at the Zoo adds a nice sideline that is very cleverly incorporated into the sinister storyline that follows.

Overall I found the book very readable. It was guilty fun and escapism from my usual hectic lifestyle.

Look what I got for Christmas! Now I can start add


Error: API requests are being delayed for this account. New posts will not be retrieved.